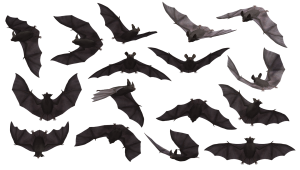 Several months ago I was in a local bookstore and was surprised to discover that while the Judaism and the Spirituality sections seemed to be shrinking, the largest book section by far was the one dedicated to Paranormal Romance novels. Spawned by the phenomenal success of the Twilight series, teen vampire love has become its own literary genre. This leaves me feeling scandalized on so many levels.

First. I mourn the apparent evaporation of the contemporary adolescent mind. I know middle-aged people have been saying this since Moby Dick was a minnow, but somehow the dating habits of uber-hot gel-headed vampires feels like a new low. Secondly, these stories all seem to present these para-humans as a misunderstood, persecuted minority. As a member of a bonafide, misrepresented and misunderstood minority, I want to scream foul and lobby for our own Messianic Jewish romance novel series. And lastly, they’re vampires! They drink blood! As a civilized people, we should be scandalized by the idea of any ritual or lifestyle that appears even slightly invested of cannibalism. This should be so because we are given our general mores from Torah, which of course abhors such behavior.

In this week’s parasha, Hashem’s attitude concerning the consumption of blood is unambiguous.

“If any person of the Household of Israel or those who reside with them consume blood; I will focus my attention on them and cut them off from his or her people.” (Vayikra 17:10)

I think it is noteworthy that this command is not only incumbent upon the native but also upon the stranger, those who do not have a con-sanguine relationship to Abraham, Isaac and Jacob. In fact in many ways this command has its roots in God’s relationship with Noah and His highest values for all people. Following the flood, God permits the eating of animals. But this allowance is best understood as a concession to the innately evil character that humankind has taken on. So God restates the command he gave to the first people: “Be fertile and increase, and fill the earth (Gen. 9:1),” but now it is followed by the sober evaluation of the relational disharmony that since developed with the rest of creation due to human sin.

The fear and the dread of you shall be upon all the beasts of the earth and upon all the birds of the sky—everything with which the earth is astir—and upon all the fish of the sea; they are given into your hand. Every creature that lives shall be yours to eat; as with the green grasses, I give you all these. (Gen.9: 2-3).

Recognizing humanity’s ineradicably evil disposition, God acknowledges that rather than a benevolent ruler who serves creation, humanity has become a predatory dictator, a rather distorted image of the Creator. However, along with the permission to eat animals comes an immediate set of prohibitions against eating animal blood and shedding human blood.

It is almost as though God expects that when man kills animals, the taking of human life is a near and soon probability. It is no wonder then, that the placing of blood upon the altar is essential for atonement, since it is the life-giving force for all animals. When people are made to recognize the sanctity of life, every life, and recognize their own blood lust, they are liberated to rededicate their own lives to the service of Hashem.