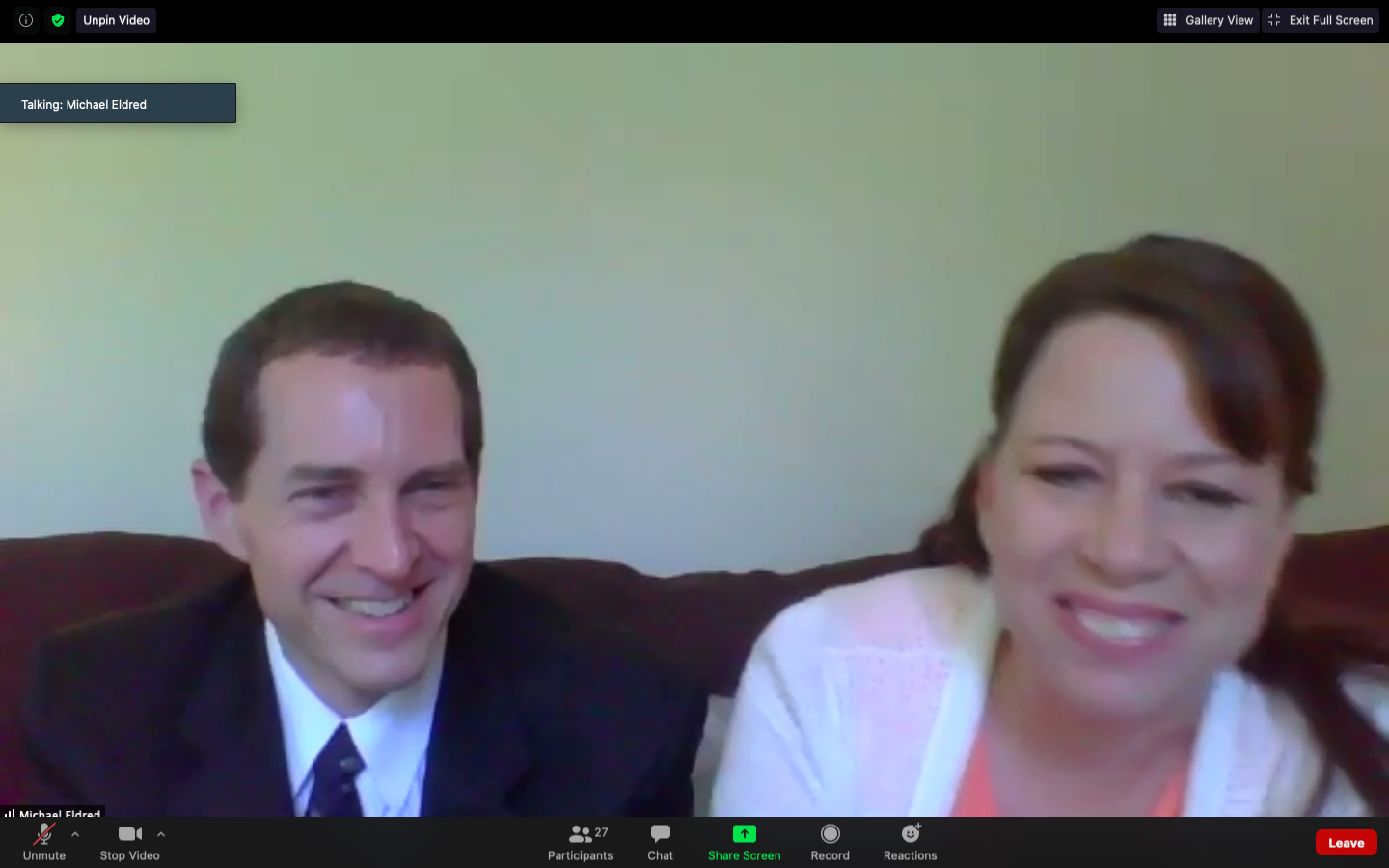 This is part 2 of MJTI’s interview with 2020 MJS graduate Michael Eldred. For the first part of his interview, where we discuss his journey to MJTI and the challenges he overcame to graduate, click here.

MJTI: What would you say was one of the most valuable interactions you’ve had with a faculty member while you were in the MJTI Jewish Studies program?

M.E. Oh my goodness. That’s a hard one… I would say, was my work with early rabbinic literature and Rav Carl. Each portion of my classwork was an eye opener. I didn’t think I could fall in love with all this material any more than I already had, and then suddenly, here’s another aspect that I had not even encountered yet… There was so much more that I was able to glean from Scripture. It helped me with my everyday walk, but also with bringing the Word to my congregation.

“Rav, I grew up in church and I thought I was a very diligent Bible studies student. I thought I knew quite a bit. Now, as I’m encountering [early rabbinic literature], it seems like I’m encountering the Bible for the first time, and I realized just how little I know.”

And Rav Carl, without skipping a beat, said,

“Yes, but the little you know has made all the difference.”

And it was such an amazing statement. It’s going to stick with me for a long time. It’s so true. I think it’s important for us to come to realize just how little we know. Boy, what a difference that makes.

MJTI: What would be your favorite classes that you have taken with MJTI?

M.E.: One of my favorite classes was with Rabbi Elliot Klayman, about medieval Judaism. That was a class that surprised me.

I went into it thinking that it was going to be more book work than most of the classes at MJTI (and there was a lot of bookwork!), but what surprised me was how engaging the material was. The creativity that he brought to the class made it very enjoyable. For example, he had us writing stories, so as a part of our reading assignments, we got to enter into our characters.

I was a medieval priest, I believe, that was writing during a difficult time in Spain during this transitional period. So the idea of writing stories was one of those creative things that he brought to the class. What I gleaned was a clear understanding of some of the points in history that can be so painful, like the pogroms during the expulsions. It is so important that we understand what happened, and that we understand both the civil side of it, how the government and leadership contribute to that, but also a spiritual side to it—because you can’t walk away from these events historically, that all [tragedy] on the Ninth of Av, and say that that’s just a coincidence. And so suddenly… the Final Solution takes on a totally different tone, because you see it as a ripple in history that keeps occurring, rather than one isolated event. There’s a spiritual aspect to all of this: there’s an ultimate good versus evil going on. And right at the center of the good is God’s plan for Israel, and right at the center of the bad is the spirit of Antichrist, this spirit that works towards destroying the people of Israel, and works towards destroying true faith in Yeshua, and true faith in the God of Israel.

MJTI: This year, MJTI had a virtual graduation. Can you talk about the experience, and whether a physical convocation will still be as meaningful?

M.E.: Well, I was surprised. I kept waiting to see a program, or an email about the order of how things would happen, but I never got that, so I thought, I guess I’ll just go with it. Whatever happens, happens. It was not what I expected.

Dr. Vered basically asked everyone to say nice things about me—they brought up all their experiences with me at MJTI, and my friends and family also spoke, and so it was very emotional. It was very different from the typical ceremony where you walk down to receive your diploma, so it didn’t take anything away from that from that event, so I am still really looking forward to that. There’s something in that handing of the diploma from those wiser than myself, and that conveyance of spirit, that conveyance of congratulatory nature.

While I was congratulated during the virtual ceremony, it was a different experience from walking to get my diploma, so I’m still looking forward to that. The virtual ceremony was humbling and I’m glad my wife was there.

MJTI: What would be your advice to any potential and incoming MJTI students?

M.E.: You should get to know your professors, and get to know the authors on a personal level. That has been such a meaningful thing to me. I had one professor for all three of my classes at my previous seminary, and I still haven’t met that professor.

I have met every one of my professors at MJTI except one, and that’s amazing considering that I live on the East Coast, some of them live in Israel, some live on the west coast, and in places in between.

So I’m amazed that I have met every professor save one, and the only one I haven’t met is Jen Rosner, which is funny because Jen Rosner was actually connected with Shuva Yisrael at one point. I know I will have an opportunity to meet her at some point and have a chance to talk to her in person.

That connection is a big deal, and that’s true of the professors, but also the authors. I absolutely fell in love with Abraham Joshua Heschel. I love his stuff. Digging into it, you find connections you didn’t know were there. I give this advice especially for the non-Jewish students, because they won’t immediately gravitate towards Abraham Joshua Heschel or one of those, because it’s not natural to do that. Growing up I had some American heroes, such as Martin Luther King Jr.. I did several papers on him in elementary grade school, and I did a mural of him for Martin Luther King Jr. Day one year in school, and his message and his character meant a lot to me.

I remember an “aha” moment for me when I was connecting with some of these authors early on, in my first or second class with MJTI. I was looking up some material for Abraham Joshua Heschel and I saw a picture of him standing with Martin Luther King Jr., and I had no idea they were friends. Now I see the influence that Abraham Joshua Heschel had on Dr. Martin Luther King, and you can see the dialogue even in their writing between them.

So, just getting to know the professors and authors on a personal level is a big deal, forming that personal connection.

MJTI: What are your future plans, now that you have a Master’s of Jewish Studies?

M.E.: It’s funny, I had this idea in my mind that somehow I was going to have all this free time, but since I finished my Master’s, where did the time go? It just got absorbed. Part of that is because the timing was perfect, [because as soon as I graduated], our congregation started working on getting back to onsite services… so I haven’t gotten a sense of having all this free time.

One of the things I want to do is finish my book [on Mussar for Christians]. I have somebody who hasn’t promised, but wants to see the manuscript, and that’s very encouraging to me.

I want to continue learning, and I think that will come about through Rav Carl to some extent, because I know he has classes. I hope that I continue to have opportunities and invites to things like Rabbinic intensives that I have been invited to in the past, that were very meaningful.

And then I want to continue with my involvement with Shuva Yisrael… when they’re back in the building, I’d like to pick up a role there. Cantillation for the Besorah portions, at times. Anything I can do to help.

MJTI: Thank you so much for your time. Again, congratulations on your graduation. Mazel tov!

This article was written by MJTI Content Coordinator Emily Klein. For more about MJTI alumni, read our interviews with Yahnatan Lasko, Michael Hillel, or Chaya Levy.