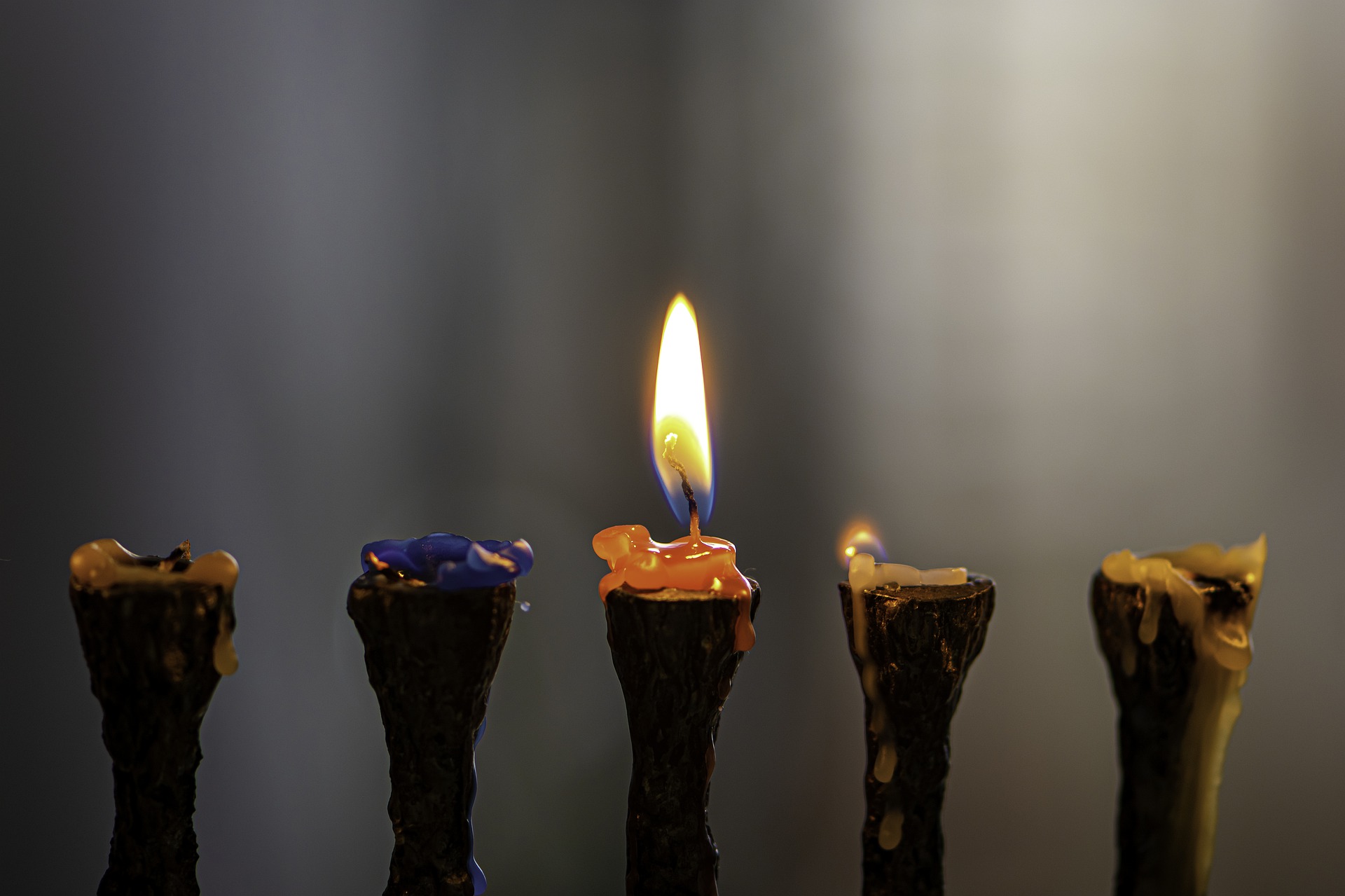 Hanukkah, the 8-day Jewish festival of lights that celebrates the rededication of the Temple in Jerusalem and the victory of the Maccabees over the Greco-Syrians in 167 BCE, is celebrated on the 25th of the Jewish month of Kislev. This usually falls in the month of December and is the dominant December holiday in Israel. Hanukkah is a minor festival on the Jewish calendar and it is not a national holiday in Israel as Christmas is in the U.S. and most western countries. Nevertheless, most of Israel celebrates Hanukkah.

Towards the end of November, bakeries begin selling suffganiyot (jelly-filled doughnuts), which are a traditional Hanukkah treat. In recent years, in addition to the simple jelly doughnuts with a red-jelly filling, doughnuts with chocolate, caramel, and other fillings are available. Some bakeries have even created fancy and expensive filled doughnuts. The one thing they have in common is that they are all fried! Besides suffganiyot, latkes (potato pancakes) are fried and served with sour cream or applesauce. Traditional foods eaten at Hanukkah are all fried or “oily”  to commemorate the miracle of the pure oil, when enough pure oil to light the menorah for one night lasted for eight nights.

Children in Israel are out of school for the week of Hanukkah. In years past, movie theaters timed the release of new movies to coincide with the holiday. Another annual tradition is Festigal, a live music and dance show for children. However, due to COVID19, movie theaters are closed this year and Festigal is being held digitally.

In Israel, Hanukkah is low-key, without much commercialization. The festival is all about tradition and family. Families gather to light the hanukkiah (8-branched menorah with one raised servant candle) and eat traditional foods. Pre-school, kindergarten, and grade school children usually make hanukkiah’s at school or clubs, resulting in families having multiple hanukkiot. Often every member of the family lights a hanukkiah. Lighting the hanukkiah is such a strong tradition that malls, stores, restaurants, and so on, light a hanukkiah so their customers can enjoy them. Orthodox families prefer to light their hanukkiot in glass containers and set them outside so passers-by can view them.

Some parents give gifts to their children, but not like the giving of Christmas presents among western nations. One or two presents may be given to the children, but usually not more than that, and there are no “gift” exchanges between family members, at school, etc. Often Hanukkah gelt is given. Hanukkah gelt is both money and chocolate coins wrapped in silver or gold foil. The chocolate gelt is used when playing a Hanukkah game with the sevivon (dreidel, four-sided top). Each of the four sides of the sevivon has a Hebrew letter representing the words Nes Gadol Haiya Po (translated: “a great miracle happened here”). The letter on which the sevivon lands determines whether the spinner receives gelt or gives gelt.

Hanukkah is a wonderful time of year in Israel, full of family gatherings, parties, and celebrations. This year Israel will once again adapt to our circumstances and celebrate Hanukkah with joy and gusto according to the current COVID19 restrictions. Like a reed that gets pushed down during a raging storm, Israelis bounce back from the storms of life. Next year, Gd-willing, we will celebrate Hanukkah with all of its traditions in the normal traditional way.

Spreading Peace During a Pandemic

We know that we should be nicer—but how? Rabbi Elliot Klayman looks at Psalm 120 for how to let our yetzer hatov shine through.